History of the Jack Williams Toboggan Chute and the U.S. National Toboggan Championships

The first U.S. National Toboggan Championships was held in 1991. To our knowledge, the Toboggan Nationals is the only organized traditional wood toboggan race in the country — most likely the world. Held annually in early February in Camden, Maine, the toboggan chute is located adjacent to the slopes at the Camden Snow Bowl, a municipally-owned year-round recreation area that has developed many thousands of dedicated skiers since 1936. All toboggan race revenue is used to offset the Snow Bowl’s nearly $1 million operating budget.

The original chute was built in 1936 by volunteers who also built a ski lodge and ski hill, one of the earliest lift-service ski venues in America. The chute was rebuilt in 1954 by local Coast Guardsmen and was used regularly by the local community until 1964, when its use ceased due to neglect causing structural issues that made it unsafe.

In 1990 the toboggan chute was resurrected once again by another group of volunteers and material donors, who combined original timbers and pressure treated wood to rebuild what would become known as the Jack Williams Toboggan Chute in honor of the man who spearheaded the community initiative. The innaugural

In the nights leading up to each race, the coldest hours are spent icing the inside bottom surface of the chute. To accomplish this painfully slow process, the chute is built up with layer upon layer of ice. This is done using a “Rube Goldberg” invention by hotelier David Dickey, by means of pulleys and rope tied to a water-filled lobster tote that is slowly pulled by hand up the chute and slowly dispenses water through small holes, plastic tubing, gravity.

The toboggan chute is 400-feet-long and rises 70-feet in elevation, allowing many toboggans to reach speeds up to 40 miles per hour. The run-out sends sleds onto frozen Hosmer pond. If there is clear ice on the pond, some sleds will go the entire way across – about a quarter mile.

The Toboggan Nationals originally was held the first weekend of February, but to avoid conflict with the annual Super Bowl football game, event organizers voted in 2008 to change the date to the second weekend in February.

Every five years we hold the Worlds race. First place winners in the 4-person division going back to 1991 are eligible to compete in the Worlds. This is a one-run, winner takes all race. An eligible teams must include at least one original team member to compete in this race.

Check out what Sports Illustrated and the New York Times have said about the U.S. National Toboggan Championships:

“A cross between an Alice in Wonderland costume ball and a family reunion, the nationals claim to be the only organized wooden toboggan races in the country. “We figured that because there wasn’t any other, we might as well call it the nationals,” says Camden hotelier David Dickey.” — Franz Lidz, Sports Illustrated

“Every year since 1991, Camden has staged the U.S. National Toboggan Championships. The name suggests a competition of professional sledders with years of training on a luge. But the races are less Olympics and more winter festival, a reason to gather in the coldest, darkest months of the year and compete on the ice chute, at the foot of the Camden Snow Bowl, the local ski mountain, owned by the town…Still, expertise matters. There are gurus of the ice chute, regulars who compete every year. Four hundred teams participate, traveling from down the road or as far away as San Diego for the thrill of the races. More than 5,000 attend, setting up their snowbound tailgates, where mulled wine and beer flow easily, warming frozen spirits and providing liquid courage to the meek.” — Keith O’Brien, New York Times 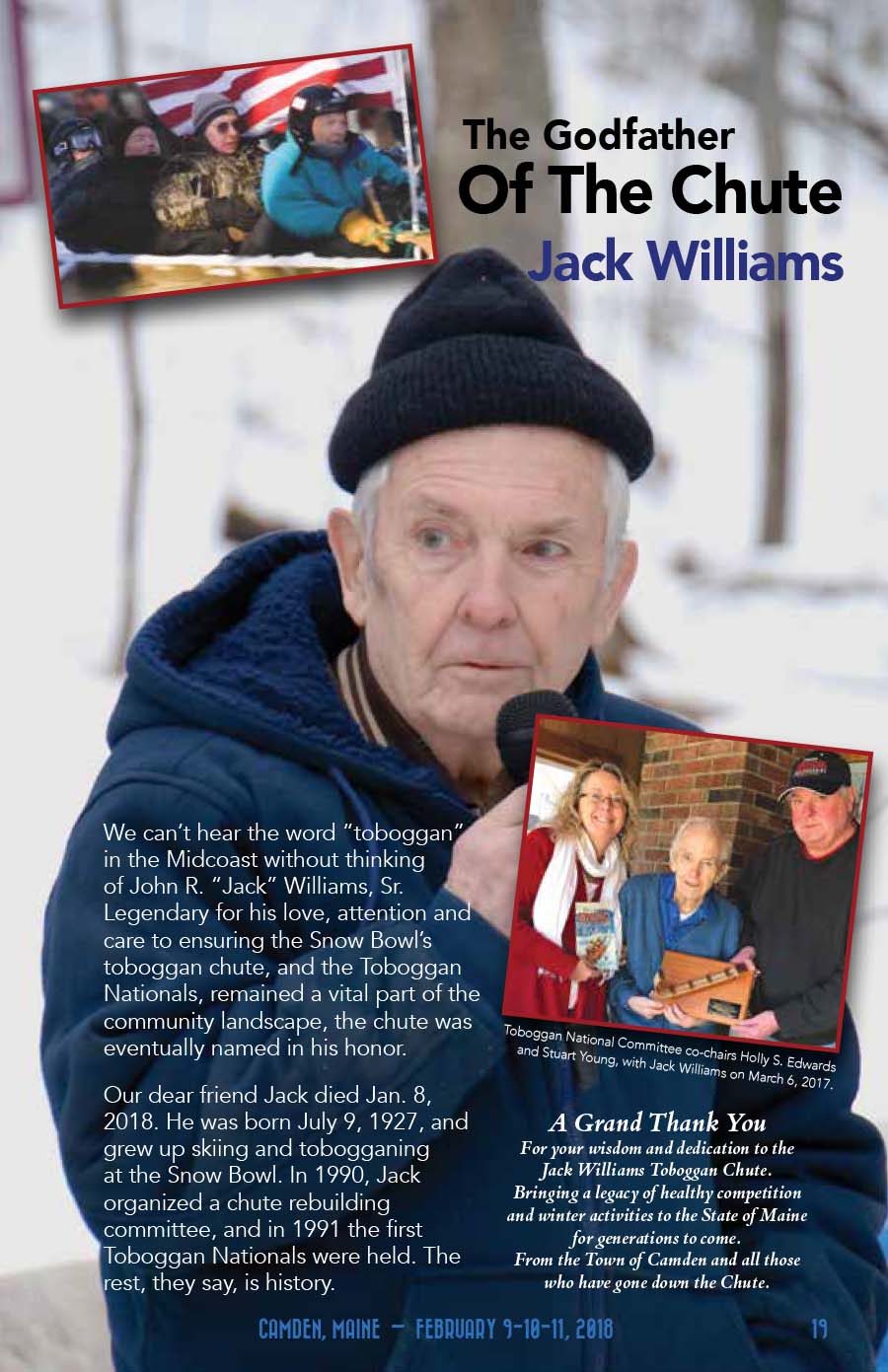